Saint Valentine's Day or Valentine's Day is a very popular holiday celebrated on 14th February by many people all around the world. The entire festival is about spreading and receiving the message of love and affection. There is mutual exchange of cards and love notes along with social gatherings and get-togethers. Different regions have their own customs and traditions of observing the festival. However, the basic concept remains the same and that is dwell in the saga of true and unending love. The history of Valentine's Day however, has been a mystery till date. No one till present knows the correct information about the history and origin of Valentine's Day. There are a number of legends surrounding the same. Most of these stories have been passed on through the generations. Hence, there is bound to be some additions and deletions. We bring you various legends regarding the mysterious past of Valentine's Day. 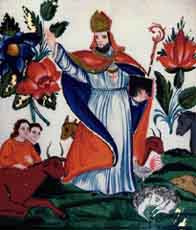 the early Christians in those days when danger and death went hand in hand. He was detained for helping some Christians who were trying to escape from the prisons where they were tortured like animals. Valentine was hauled before the Emperor of Rome and was ordered to be put in jail. There, he alleviated the jail keeper's daughter of loss of sight. When the pitiless emperor came to know about this phenomenon, he gave orders of beheading Valentine. He is said to have sent the keeper's daughter a farewell message signed, "from your Valentine", morning of the execution.

Another legend and a paradox is that three Saint Valentines have been mentioned in the early list of martyrs under the date of 14th February. One is supposed to be a priest in Rome, another is said to be the Bishop of Interamna (now in Italy) and the third one lived and died in Africa. The Bishop of Interamna is the most popular modern Saint. He was a Christian martyr who lived in northern Italy and was martyred on 14th February around the third century following the orders of Emperor Claudius for breaching the outlaw on Christianity. Despite the fact that Valentine of Interamna and Valentine of Rome have different entries in martyrologies and biographies, most scholars deem they are the same person.

Are You in Love

Getting Serious in a Relation

How to Ask Out

How to Say Sorry

Spice Up Your Home

I Love You in Different Languages

Reasons Why I Love You